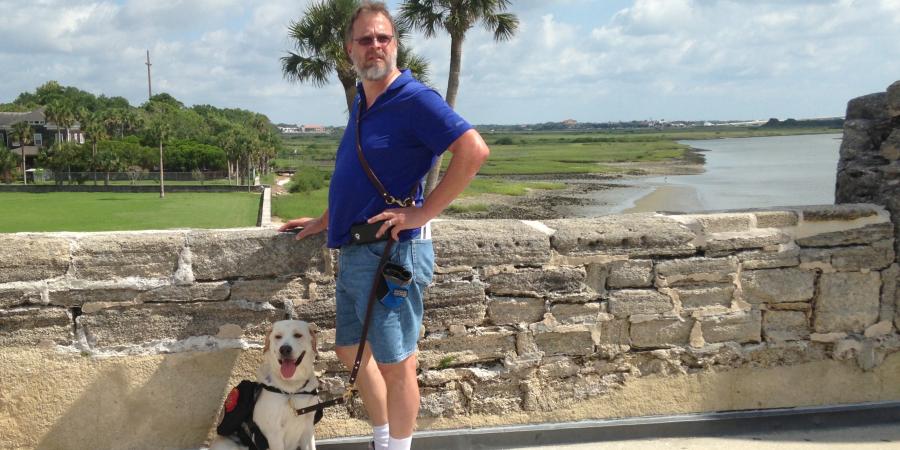 Taking the time to enjoy my retirement.  My wife and I are looking forward to traveling, hiking and camping throughout the U.S.

I grew up in Satellite Beach with a great, loving family.  We loved camping and all of us were in the Boy Scouts and played sports all through school.  My brother and I even made Eagle Scout.

I began my military service in 1988.  My first cruise in the Navy was during Desert Shield aboard the “Ike” CVN (69).  I was attached to VS-31 when I was blown down and rolled over the side by an A-6 Intruder.  As I was going over the side, a shipmate pulled me back up.  Luckily, I only ended up with bruises on my body and face.

During Desert Storm, I was in the Corrosion Control shop painting aircraft.  This gave me lots of free time to assist the Air Wing (CVW7) in loading bombs, Fuses, Rock Eye, HARM Missiles and other weapons.  I did three tours in Iraq doing this job and reacting to alarms as if was a part of normal life.

While attached to VF101, an Airman was sucked up in the intake of a running F-14 Tomcat.  I was in charge of clean-up, I just couldn’t see making any of my men do something like that.  So I took it upon myself to do the job.  I had to pick up pieces of a human being, it was something I will never forget.  Later in my career while I was attached to VA-42, an A-6 crashed into the side of the mountain and I had to identify the parts of the aircraft.  We kept picking up parts and pieces that were bloody and it brought back all of my old memories.  I eventually left the Navy and joined the Florida Air National Guard.

Then came the divorce due to how much I had changed.  I had no idea it was from coming back from the war and she just didn’t understand who I was anymore.  It was around this time (Christmas 2010) that I started to have bad nightmares and flashbacks to the tours I did in Iraq and Bosnia.  Even knocking over the night stand in my sleep.  My depression was out of control and my money was going faster than I was earning it.  I had no food for my daughter and I, the bills were stacking up and my health was fading.

My sleep patterns grew worse and worse, to the point where I would get two hours of sleep a night.  My amount of migraines began to climb to six or seven times per week.  The medications my doctor prescribed did not help.

I started to think about killing myself in January/February 2011. I actually began making plans every day after work to go home and put my Glock in my mouth or to my head to end it.  Between the divorce, child custody, migraines, work stress, nightmares, flashbacks, lack of sleep and bad memories, I just couldn’t take it anymore.  I would just sit in a ball and cry, holding my gun in my mouth wanting to die.  I just could not adjust to non-war life, I wanted to go back to the combat zone where things seemed normal.

In May 2011 I realized that I needed professional help.  I remembered all of the briefings in my 24 years of military life that said go to your Chief if you need help.  So, I did.  I told her what was going on and she took me to the social worker on base for help, then to family services for financial help.  I started to see them once a week and was officially diagnosed with PTSD and Depression.  Things started to settle down a little with the help of the VA, many doctors, prescriptions, therapists and my new wife who understands what is going on.  I feel a service dog will be the final piece to the puzzle that will allow me to take the final road to recovery.

It is something you can overcome with help and understanding but you have to be willing to try.

Coyote is almost 2 years old. He came from Putnam County Animal Control. His original owner was an elderly man who couldn't handle all of Coyote's puppy energy. He was forced to surrender Coyote to animal control after Coyote jumped on him and knocked him into a water trough, almost drowning him. He was evaluated for the program. His sweet nature and willingness to learn and please made him a great candidate for a service dog. Coyote has matured a lot and has learned an appropriate outlet for his energy - serving his warrior. Coyote has become an exceptional service dog who loves his job and his warrior. His happy face says it all!