Operation Homestead's mission provides trained canines with military base units, chapters of the United Service Organization (USO), and Red Cross for the benefit of military service members and their families.

Since 2012, WBF has provided service dogs at no cost to veterans who suffer the effects of post-traumatic stress disorder (PTSD), military sexual assault, and traumatic brain injuries (TBI). Since inception, WBF has placed approximately 65 service dogs with individuals and agencies. In 2018, after speaking with multiple military bases, WBF identified a way to expand the impact beyond the original model of 1:1 warrior-canine matches. WBF began training facility dogs to be placed within the psychological services or counseling offices on military bases, and training dogs to be placed with chapters of the United Service Organization (USO), or Red Cross

In 2018, WBF placed a rescued therapy dog, Apollo, with the sexual assault prevention and response coordinator at Whiteman Air Force Base in Warrensburg, Missouri. Apollo provides comfort and support in clients’ therapy sessions and accompanies men and women in stressful situations, such as doctor’s visits and court appearances. In 2021, Farley was the first dog placed with the Kansas chapter of the USO. He has a busy calendar of public appearances, meeting family members during events, making visits at the military hospital, attending group and individual counseling secession, assisting students at base K-12 schools, and providing support and companionship to everyone on base. The Kansas USO chapter quickly realized the need for an additional dog and has made that request of Warriors’ Best Friend. Additional chapters across the country are looking at the model and considering requesting a dog. 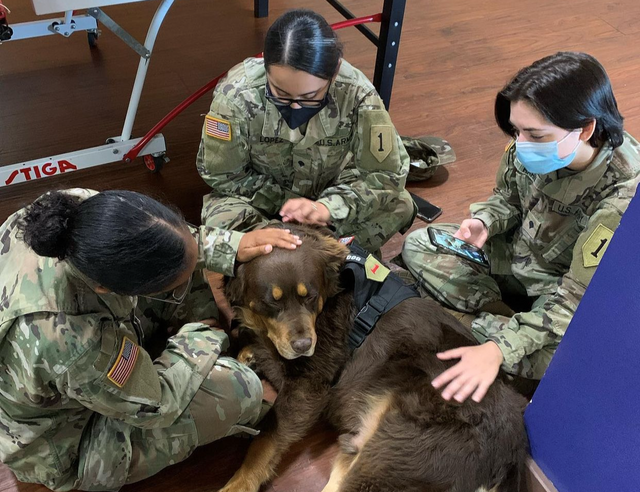 When a person serves in the military, their entire family serves. Spouses and dependents may have to endure multiple moves, deployments, and the constant fear that their loved one may not come home. This can take a toll on one’s mental health over time. Currently, one in four veterans suffers from post-traumatic stress disorder (PTSD) and/or traumatic brain injury (TBI). Although often characterized as invisible wounds, these injuries have devastating effects on the lives of these veterans, their families, and their communities. According to the Bureau of Veteran Affairs, since 2001, more Iraq and Afghanistan war veterans have died by suicide than the number of soldiers lost in combat. On average, 26 veterans die by suicide every day.

Warriors’ Best Friend seeks to improve the quality of life of military personnel and their families through animal-human interaction from a trained facility dog. One need not review the literature to understand why 67% of U.S. households (i.e. 85 million families) own a pet (American Pet Products Association, 2019). Friendly pets are loyal companions that can help mitigate feelings of isolation and loneliness in the absence of positive social interaction. They need attention and basic care, requiring that the owner or caretaker take responsibility to meet those basic needs. They provide affection and attention and respond to direction. A meta-analysis of 69 studies of animal-human interaction published in 2012 found well-documented effects on multiple populations in the areas of social attention, social behavior, interpersonal interactions, and mood; stress related biometric variables such as heart rate and blood pressure levels; self-reported anxiety and fear; and mental and physical health (Beetz, Uvnas-Moberg, & Kotrschral).

Meet two of our graduates, Remington and Farley!

Farley and Remington touch thousands of lives annually through USO Kansas. They bring a comfort level to the Center for the Service members and their families. In addition, they assist with USO outreach by traveling to all locations USO Kansas services. The presence of Farley and Remington brings a sense of peace to people and even causes excitement in some. USO Kansas is all about connection. Farley and Remington help with that mission by serving as a tool for the USO to further connect with those they serve.

Where can you find Farley and Remy? 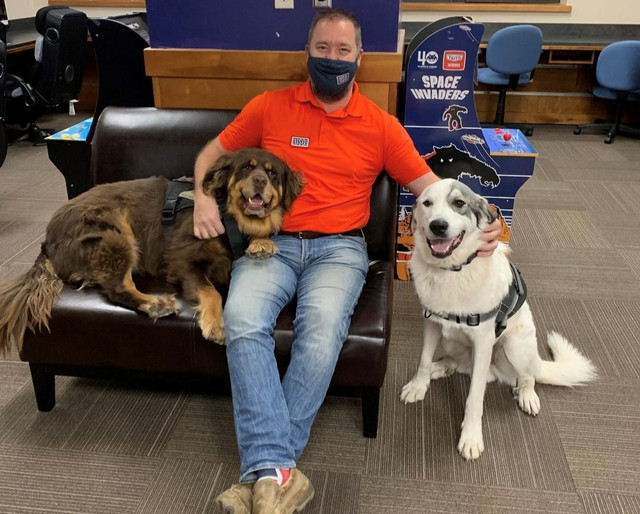 To learn more or if interested in acquiring a facility dog contact Joe Jeffers, Executive Director, at Joe@warriorsbestfriend.org!