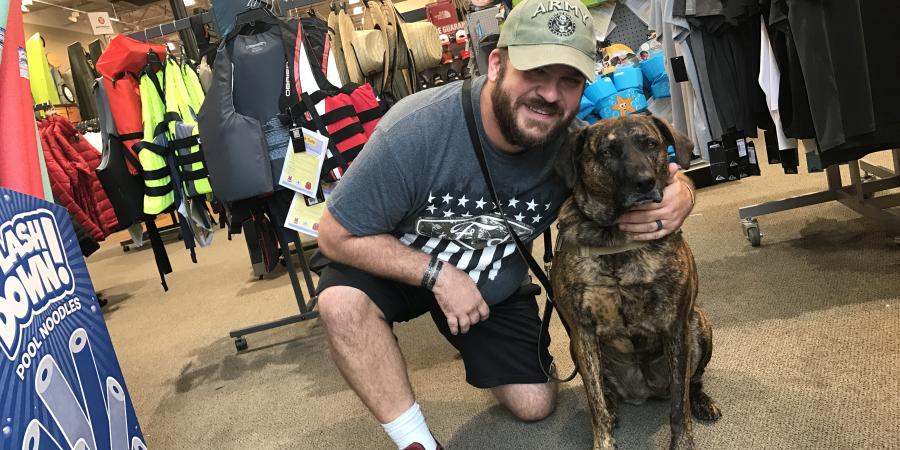 I grew up in a small town in Illinois. The military vein runs deep in my family. My grandpa was an airplane mechanic in World War II, my dad was a telephone Operator in Vietnam, and my brother was a tank driver during Operation: Desert Storm. After I graduated high school, I enlisted in the United States and served a total of eight and a half years.

During my time in the United States Army, I assumed many different roles. For the first half of my service I was a machine gunner and during the last half I was a squad leader, a time during my service when I was in charge of 15-30 men. I deployed twice to Iraq, the first time in 2007.

During my first deployment I was hit by an IED explosion and lost several of my friends. That’s when I first became aware of my symptoms of Post traumatic stress and Traumatic Brain Injury which manifested not just psychologically, but physically as well. That’s one of the main misconceptions I think people have about PTSD—it’s not just mental, it affects your body comprehensively. When I’m out in large crowds my anxiety completely overtakes me, and as a result I suffer from migraines, my body tenses and I feel like I’m going to have a heart attack—all of the combined stress is exhausting and debilitating.

PTSD can be a very lonely thing to experience—on the outside, to everyone, you seem perfectly fine, but on the inside it’s a completely different story. But everything’s changed now that I have Gabbie. She can sense what people can’t. Gabbie is such a loving presence in my life and she’s going to help me in so many ways.

Gabbie is going to give me purpose again, something to do. When I’m feeling depressed and anxious she’s going to help pull me out of it—not just with her sweet personality, but also from the responsibility that comes along with having a service dog—she’s like my child and she depends upon me. With Gabbie, I’m looking forward to getting out of my house more and enjoying time spent with my wife and two kids. I’ll get to go cheer on my son at his football games, and instead of watching my daughter’s dance recital video, I’ll get to be another parent in the crowd.